Whether you’re a student, teacher, parent or mentor, if you’re one of the growing members of Facebook, you should visit our new Mister Science Fair Facebook page.

If you “Like” us on Facebook, you will get exciting ideas and useful information, advice and resources about creating a science fair project and/or an engineering design project. You’ll also find out news about science fair competitions around the world for students, teachers & schools, and much more.

Mister Science Fair is constantly evolving and changing, and we have lots more exciting developments in store soon, both on Facebook and on our website. If you have any thoughts or comments about what you’d like to see on our web site or Facebook page, please get in touch with us at info-at-mistersciencefair.com

A cartoon about preparing for your science fair, from National Geographic:

I recently read a quote from the most influential physicist of the 20th century, Albert Einstein, and it immediately made me LOL (laugh out loud).  Einstein said, “A person who has not made his great contribution to science before the age of thirty will never do so.” (Brodetsky, S. Nature 150, 698-699 (1942)).  I don’t know why I thought the quote was funny, but it brought to mind the importance of getting students interested in science and the “wow factor” of scientific discovery, at as young an age as possible.

Research indicates that the most recent Nobel Prize winners made their discoveries in mid-life (late 40s) and, that NIH grants have been awarded in recent years to more established scientists (late 40s), But there are many scientists including Einstein, who made incredible discoveries or who developed inventions in their 20s. Among the youngest of the bunch includes Microsoft founder Bill Gates and Guglielmo Marconi, the inventor of the radio.

James Watson was only 25 when he wrote one of the most important scientific papers of all time about DNA.  Isaac Newton was 23 when he began inventing calculus. Galileo published his first piece of writing at age 22.  Edwin Armstrong, an electrical engineer who was fascinated by radio from childhood, built a 125-foot-tall antenna in his front yard at the age of 20; within two years he invented the continuous-wave transmitter and the regenerative circuit which developed the backbone of radio communications as we know it, and later invented FM Radio.

Younger scientists and inventors also include Apple co-founder Steve Jobs, noted chemist Glenn Seaborg, and Danish Nobel Prize winning physicist Neils Bohr who developed the model of the atom and who’s one of the scientists featured in a new book for children The Desperate Case of the Diamond Chip.

The one thing all the “younger scientists” mentioned above, seem to have in common is an inquisitive mind. The story is told about Einstein’s curiosity at a young age about the pocket compass his father showed him, and Einstein’s interest in what made the needle move despite the “empty space.” Bill Gates developed a fascination about computer programming when he was a teenager, and spent countless hours learning how to do different things with source codes and computer languages before anyone else his age at the time. With Glenn Seaborg, it was a high school science teacher that spurred his interest in chemistry, and in college Seaborg learned to ask relevant questions in his dealings with Berkeley physicist Robert Oppenheimer, who later became the director of the Manhattan Project.

A few years ago, Francis Collins, the director of the NIH, stated in a Wall Street Journal article (Fleeting Youth, Fading Creativity, February 2010) “researchers in the early stages of their careers tend to be the ones with the fire in the belly. They’re not afraid of tackling the really hard problems.”  As a result, Collins further went on to say the NIH was intending to increase the percentage of grants going to scientists applying for their first grant.

Discoveries by younger scientist may be more commonplace over the next decade as a result of the response by the NIH and because of the Next Generation Science Standards.  These new standards, mentioned in one of my earlier blogs, will result in more teaching and testing of students on STEM (Science, Technology, Engineering and Math) literacy in elementary, middle and high schools across the USA.

Encourage a youngster you know to get interested in science. 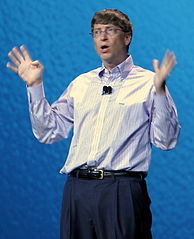 Bill Gates was 13 years old when he developed an interest in the then burgeoning field of computer programming. Within a few years, he found ways to access computer time at local computer companies. By the time he was a college sophomore, he was devising solutions to complex and unsolved math problems with his programming skills. Before his 32rd birthday, Gates had become the world’s youngest self-made billionaire.

On this day in 1868, Thomas Edison of Boston, Massachusetts applied for his first patent. Although Edison was well known for his invention of the light bulb, his first patent was for an “Electrographic Vote Recorder.” The first of its kind device would enable a legislator to register a vote either for or against an issue by turning a switch to the right or left. His patent was later issued by the U.S. Patent Office on June 1, 1869 (No. 90,646). Edison eventually held over 1,500 patents.