Have you ever heard of the Nobel Prize? Since 1901, this award has been given once a year to the world’s greatest contributors to science in the fields of chemistry, physics, physiology or medicine, literature, for peace, and since 1968 in the field of economic sciences. The Nobel Laureates for this year were chosen a few weeks ago, and they will receive their prizes at a ceremony on December 10th in Stockholm, Sweden.

In the past, Nobel Prizes have been given to scientists who contributed to the discovery of DNA, HIV (the virus that causes AIDS), the person who discovered x-rays, and to the scientists who discovered penicillin and how our immune system works. Albert Einstein was awarded the Physics Nobel prize in 1921 for his discovery of the law of Photoelectric Effect. Marie Curie, the first woman to receive a Nobel Prize in 1903, is the only person to win the prize twice and in two different fields – Chemistry and Physics.

The road to a Nobel prize starts with people asking questions about the world around them and figuring out ways to find answers to their questions.  In other words, scientists who are curious just like you, and who do experiments just like you’ll do in with your science fair project!

The myth surrounding science is that you have to be really good at all branches of science and math to be a real scientist. This is simply not the case. In this short video about the life of chemists who have won the Nobel from Nobelprize.org, you’ll find out that it all comes down to — as Rudolph Marcus, the 1992 Nobel Prize winner in Chemistry says — “Curiosity…just curiosity. Just by walking into the street you can ask yourself an endless number of questions. – Trees are green. Why are they green and why are they not blue?”

What are you curious about? Let us know below. 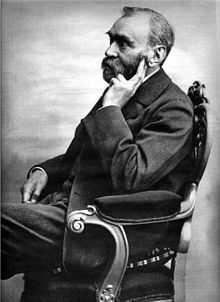 Alfred Nobel (1833-1896). Since 1901, the Nobel Prize has been honoring men and women from all corners of the globe for outstanding achievements in physics, chemistry, medicine, literature, and for work in peace. The foundations for the prize were laid in 1895 when Alfred Nobel wrote his last will, leaving much of his wealth to the establishment of the Nobel Prize. But who was Alfred Nobel? More information about the scientist, inventor, entrepreneur, author and pacifist here.

Why is the sky blue? John Tyndall (1820-1893) was born on this day in 1820. Tyndall was a geologist, surveyor, physicist, atmospheric scientist and mathematician who answered this question in a book called “Light.” Tyndall was best known for his extensive work on crystals. His original work was on the radiative properties of gases, which led to the invention of the spectrophotometer which he used to measure water vapor, carbon dioxide, ozone and hydrocarbons. Tyndal also invented other things such as a fireman’s respirator and a fog-horn.