I read a quote from the most influential physicist of the 20th century, Albert Einstein, and it immediately made me LOL (laugh out loud).  Einstein said, “A person who has not made his great contribution to science before the age of thirty will never do so.”(Brodetsky, S. Nature 150, 698-699 (1942).  I don’t know why I thought the quote was funny, but it brought to mind the importance of getting students interested in science and the “wow factor” of scientific discovery or engineering & technology, at as young an age as possible.

Research indicates that the most recent Nobel Prize winners made their discoveries in mid-life (late 40s) and, that NIH grants have been awarded in recent years to more established scientists (late 40s), But there are many scientists including Einstein, who made incredible discoveries or who developed inventions in their 20s. Among the youngest of the bunch includes Microsoft founder Bill Gates and Guglielmo Marconi, the inventor of the radio.

James Watson was only 25 when he wrote one of the most important scientific papers of all time about DNA.  Isaac Newton was 23 when he began inventing calculus. Galileo published his first piece of writing at age 22.  Edwin Armstrong, an electrical engineer who was fascinated by radio from childhood, built a 125-foot-tall antenna in his front yard at the age of 20; within two years he invented the continuous-wave transmitter and the regenerative circuit which developed the backbone of radio communications as we know it, and later invented FM Radio.

Younger scientists and inventors also include Apple co-founder Steve Jobs, noted chemist Glenn Seaborg, and Danish Nobel Prize winning physicist Neils Bohr who developed the model of the atom and who’s one of the scientists featured in a book for children from the Galactic Academy of Sciences: The Desperate Case of the Diamond Chip.

The one thing all the “younger scientists” mentioned above, seem to have in common is an inquisitive mind. The story is told about Einstein’s curiosity at a young age about the pocket compass his father showed him, and Einstein’s interest in what made the needle move despite the “empty space.” Bill Gates developed a fascination about computer programming when he was a teenager, and spent countless hours learning how to do different things with source codes and computer languages before anyone else his age at the time. With Glenn Seaborg, it was a high school science teacher that spurred his interest in chemistry, and in college Seaborg learned to ask relevant questions in his dealings with Berkeley physicist Robert Oppenheimer, who later became the director of the Manhattan Project. 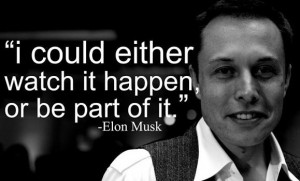 Elon Musk was in his early 30s when he founded SpaceX

Then, there’s the story of Elon Musk who taught himself computer programming at age 12. Most people know he owns Tesla and by now you probably also know that Elon Musk founded SpaceX, an aerospace manufacturer and space transport services company.

SpaceX designs, manufactures and launches advanced rockets and spacecraft. The company was founded in 2002. It’s goal was to revolutionize space technology and enable people to live on other planets.

In 2013, a 10-year-old in Canada became the youngest person ever to discover a supernova, or exploding star. Read more about 7 awesome discoveries made by kids here.  Or, read about 5 famous scientists who started their work as teens.

So, what do you think? Do you think Einstein was right when he said “A person who has not made his great contribution to science before the age of thirty will never do so”?  Join the discussion on our Facebook page.

Encourage a youngster you know to get interested in science.

Bill Gates was 13 years old when he developed an interest in the then growing field of computer programming. Within a few years, he found ways to access computer time at local computer companies. By the time he was a college sophomore, he was devising solutions to complex and unsolved math problems with his programming skills. Before his 32rd birthday, Gates had become the world’s youngest self-made billionaire. What most people do not associate with Gates, is the word ‘risk’. But Bill Gates had to go through the same trials and tribulations
reprinted in part, from an earlier Blog post on the same topic