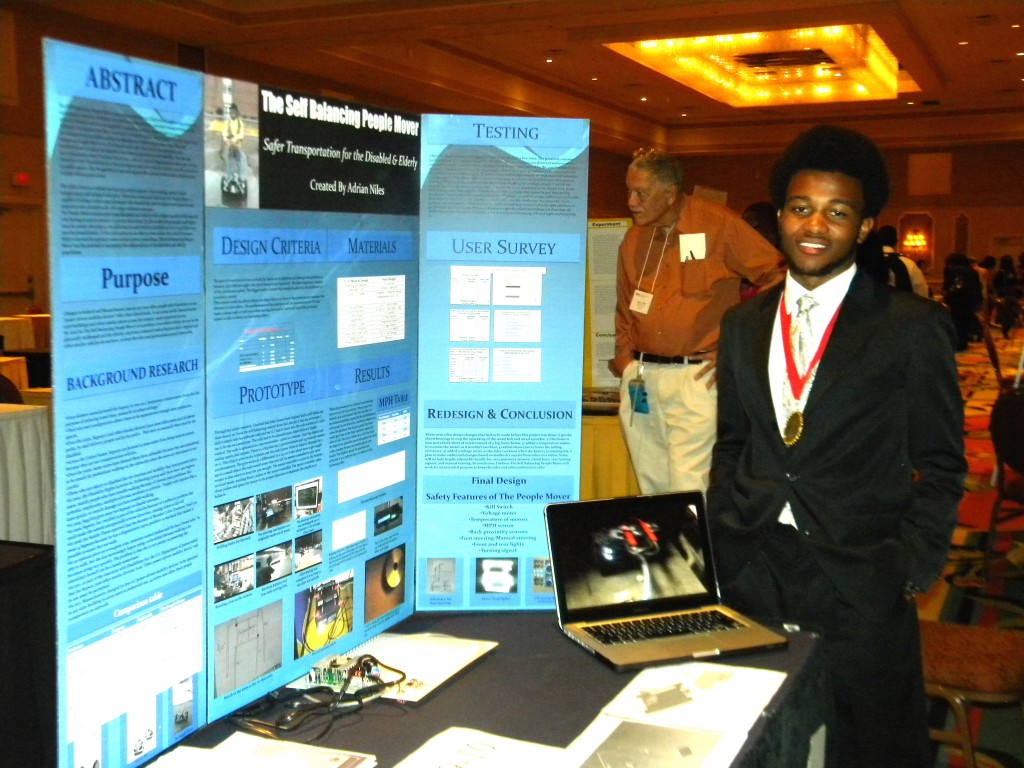 Congratulations to Mister Science Fair mentee & Boston NAACP youth science & engineering competitor Adrian Niles, who won the Silver Medal at the national competition of the National Association for the Advancement of Colored People’s Afro-Academic, Cultural, Technological and Scientific Olympics (ACT-SO) on July 14, 2013 in Orlando, FL.  Adrian is a resident of Brockton, MA and will be going into his senior year at Southeastern Regional Vocational High School in Easton.

Adrian’s creation of a self-balancing, two-wheel, personal transportation device took second place in the category of engineering.  His vehicle, similar to the more commonly known Segway, is called the “People Mover” which he modified to include new safety features designed for ease of use by the elderly and disabled.  He’s been working on this project for the last two years, and winning a medal at the ACT-SO nationals was a dream-come-true for him.

ACT-SO is a yearlong achievement program designed to recruit, stimulate, and encourage high academic and cultural achievement among African-American high school students. “The ACT-SO competition is a work of love for the countless volunteers who work with these young people throughout the year to get them prepared to compete,” said Michael Curry, Boston NAACP President.

Mister Science Fair hosted ACT-SO information on its web site for the Boston Branch NAACP, and our staff mentored Adrian with his project.

(Here’s the article about Adrian’s win at the Boston ACT-SO competition earlier this year, along with pictures of his homebuilt segway.)

Marcellin Berthelot (1827-1907) was born on this day in 1827. A French chemist and science historian, Bertholet’s creative thought influenced the development of chemistry. He helped to found the study of thermochemistry and coined the words exothermic and endothermic. His syntheses of many fundamental organic compounds helped to destroy the classical division between organic and inorganic compounds.